A view the fire-insurance man could warm to:
flushed from tarry staves,
a shaken chain
of unending diamonds drops
from a water tower with a steady drip.
One day in winter, new wood, briefly blond,
is nailed into place – sheathing
preparing for weathering.
In a week, new traces erased:
old as before, now watertight.
From the window in daylight – stable,
self-contained -- it’s a portly administrator
in a newly sewn suit.

Was what you did last night what’s called
slipping into something comfortable,
saying, “No idea-killing here,” and
me there going and missing my cue again?
I remember the late professor R. O. Payne --
Chaucer scholar, tomb-brass rubber, and
angling partner to some of the best --
saying what lay beneath might be more
than you wanted to become acquainted with
in scary twilight waters.

In movie reverse,
the splash run backwards:
person dives out of the water,
big fish flies back in.
To summon sleep now,
no more drip counting. I fall
to the rise of fish in a stream,
my inverse water torture,
the old way.


It doesn't really square.
First, he's not a landscape man,
except for that furry background noise
behind the dancers and the picnickers.
And though he's not a radical,
depicting workers at their trades,
few smokestacks or trains,
no more is he a royalist.
With Fragonard, he shares a
penchant for green and pink
and les bons temps.
Between these two, though,
there is water
flowing limpidly
under the bridge.
He doesn't do military men,
unless noncommissioned,
and dancing.
Few poppyfields, oceans.
His boats are moored
to docks quite often, their former
occupants scrubbed for dinner
along the riverfront.

But once, on a visit to Versailles,
Renoir was piqued
by the lengthy vistas and the rippling fountains.
Trained in forests Barbizonian,
he knew a thing or two about
framing the open air.
Thus, on a small, horizontal canvas,
strange to him and to the location,
a nameless green sward leads
to stony, distant forms.
As if Renoir were counting
the ways he could not be Renoir.


. . . .The January 1927 Knoedler exhibition of Nadelman’s “galvano-plastiques” consisted of five near-lifesize female figures and several busts. The show’s casual premise was the circus, long one of Nadelman’s favorite sources of inspiration. The titles of several of the figures were taken from the circus, burlesque, or vaudeville – always the music hall rather than the ballet. The full figures -- two of them standing and three seated -- were called Dancer Before Appearing on the Stage, Tight Rope Dancer, Lion Tamer, Acrobat, and Resting After Performance. We can only guess at which was which, since their titles – as so often with Nadelman – seem largely interchangeable and the sculptures are nowhere near as literal as their titles. They may well have been made up simply for the purposes of the show. The sculptures are actually glosses on the occupations described and, when all is said and done, they resemble ballet dancers in their general grace and bearing. To spice things up, there was the bust called Ringmaster, a bemused roué in top hat and painted-on mustache. (Perhaps he was a stand-in for ringmaster Nadelman, who sported a mustache at the time.)
The look of these sculptures represented a departure for Nadelman, albeit one that was easy on the eye. In profile or outline, they were soft and somewhat veiled – more Renoir (whom Nadelman admired) or Medardo Rosso than Maillol, Brancusi, or, well, Nadelman. Compared to the sharp outlines of much of his earlier work, these were positively soft-focus. The figures might also have seemed soft-porn, in a refined way, as their at-once clothed and unclothed demeanor was drawn from the skimpily but tightly clad (or clad in tights) circus and music-hall performers they represented. The female busts are a more sedate group, with the focus more on facial nuance than on gesture. As usual, Nadelman’s figures and busts boasted a repertory of gestures, expressions, and accoutrements (such as bows and ribbons). Outstretched, encircling, or reaching arms, a crossed leg turned inward on a seated woman – these were some of his customary and endlessly varied sculptural and graphic gambits. And the sculptor’s use of paint on figure sculpture was broadly and freshly there for all to see. Once again, he had done something that may have seemed jarring, even as it linked him to all sorts of earlier sculptural and decorative traditions – or precisely because of that.
There are different versions of top-hatted men in Nadelman’s oeuvre, and an unpainted one with an aquiline nose (not in the original exhibition, but in the current one) is a bit reminiscent of Abraham Lincoln. That is only fitting, since the medium of galvano-plastique, or electroplated plaster, had been in use in the 19th century for such items as commemorative medals, reliefs, and busts of such notables as presidents. Traditionally, the medium provided a way of simulating bronze without the weight or the expense of that material. Galvano-plastique had an industrial connotation that must have pleased Nadelman. In fullest flower artistically in the 1870s and 1880s in France, it was certainly not new when the sculptor made this series of works. Rodin had used it experimentally on one of his early figures, the St. John the Baptist.
Generally, a (usually modest-sized) plaster item would be dipped in a bath containing a bar of, say, copper. When electric current was applied to the bath, the copper would adhere chemically to the plaster and coat it. The Nadelman figures would have been quite large for the treatment and therefore would have represented quite a technical feat. After all, the S. C. Tarrant Company, which Nadelman used for the task, specialized in “Galvano-bronze products” and touted the likes of ashtrays. As so often in his use of non-traditional materials, the sculptor must have enjoyed challenging fabricators accustomed to commercial applications to help him achieve his own goals and specifications.
. . . . As with the wood genre pieces of the early 1920s, which had been produced with the help of machinery and the techniques of American figurehead and shop-figure carving (which, in turn, harked back to earlier European sculpture-making practices), Nadelman was producing “low” doppelgangers for his “high” productions. The subject matter played along. Nadelman’s painted sculptures – in plaster, wood, bronze, and galvano-plastique-- were often referred to, even by admirers, as “caricatures”. That term -- if not really capturing their intent -- reflected both their perceived role as being opposed to the artist’s more classical work and their ties to the world of entertainment, which they so often mirrored.
What Nadelman strived to have all of his work embody was the quality of being “plastique.” In almost all of his writings (mainly done in the 1910s), he held the quality of plasticity above all others. For him, this term seems to have signified sculptural creation with intent. Not for him the subconscious or the automatic – he was frankly a non-Freudian artist in that sense. He claimed that a subject was necessary as something on which to base plastic art. In the absence of plasticity, which involved attention to and mastery of materials, subject matter could lead to the mere imitation of nature. And in the absence of either subject or plasticity, he felt there was only the formless venting of feeling.
By appropriating industrial-style means and using non-precious materials, Nadelman was anticipating both general trends of the Depression years and the exigencies of his own later scaled-back practice. Although his carved marbles and carved-wood sculptures would still have been considered examples of plastic art, the move toward a fluid, modeled, and molded quality in his work in cast terra-cotta, papier-mâché, and plaster had perhaps found its very bearings in the term and the phenomenon of galvano-plastique.

Ongoing reviews for ARTnews and other journals


Hundreds of exhibition, print, and book reviews for ARTnews and other publications from 1978 on.

Making It Modern: The Folk Art Collection of Elie and Viola Nadelman
Presented and published by the New-York Historical Society - Winner of the 2017 biennial book prize awarded by the Frick's Center for the History of Collecting

Cynthia Nadelman is a contributing editor of ARTnews and her art writing has also appeared in American Heritage, Elle, Sulfur, Sculpture Review, Metalsmith, American Ceramics, Drawing and numerous museum and gallery catalogues. Her poetry has been published in The Paris Review, Pequod, The Gettysburg Review, New American Writing, Denver Quarterly, and Southwest Review.
Nadelman was born in Italy and grew up in Poland, Germany, Liberia, and Washington, D.C. while her parents served with the U.S. State Department. She graduated from the Madeira School and from Bryn Mawr College, where she majored in German. She has been an editor at ARTnews and Drawing, and at In/Sight, the online magazine of eartgroup.com; and has done editing for the World Monuments Fund and the Public Art Fund. She has received fellowships from the Ingram Merrill Foundation and the New York Foundation for the Arts. She is the granddaughter of sculptor Elie Nadelman, on whom she has written extensively.
Nadelman has also been involved in collaborative projects. Three of her poems were set to music for the song cycle “Slices,” by composer Joseph Pehrson. The title work on composer John Morton's CD "Solo Traveler"(Innova) is a setting of her poem "The Cathedral as Process"(Partisan Review) for five singers and manipulated music boxes. In collaboration with visual artist Nade Haley, she has produced "A Lure," a digital print/poem. 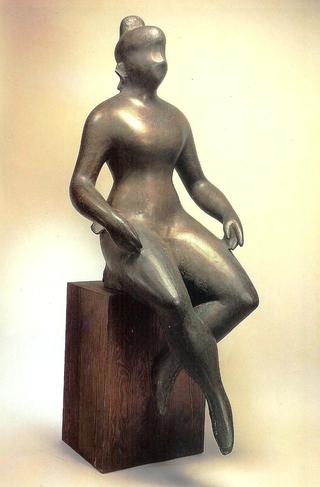 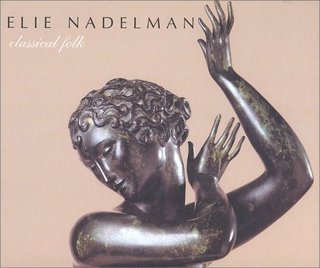